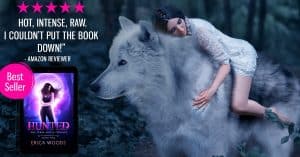 My head snapped around, took in her too-pale face, the nightmares swimming in her eyes. “Who?”

She shuddered and her throat worked as she attempted to swallow. To speak.

“Who?” I demanded. Was ready to fucking murder.

The men who had her?

My world went black. She said something else but I couldn’t hear it over the roar rattling in my skull.

Rage licked up my chest. Wrapped around my heart. Burned.

Took all my effort to keep my body still. To not explode out of my skin and rip the room to shreds in my fury.

They hurt her. Did something to her. Something that scarred her.

My jaw clenched too tight to speak. Fangs had already descended, my beast howling for blood while fury blazed through us both.

Several seconds passed. I growled. Snarled. And when words finally became possible, they were warbled. Distorted. Murderous. “What. Happened.”

I couldn’t look at her. If she cried, I’d lose it. If the agony in her voice showed on her pale face, I’d shed my human skin and go on a rampage unlike anything this world had seen since the Beast of Gévaudan.

“They would—” Her voice broke again, a soft sob escaping.

The rage I felt in that moment flayed skin from muscle and stripped tendons and tissue from bones. It left nothing untouched, nothing alive. It burnt through me, maiming and destroying and annihilating, until all that was left was a smoking carcass and a few, brittle bones.

She’d run screaming from the room.

“Tell me.” It was a command. Harsh and brutal and with edges that cut.

But not as deeply, not as thoroughly as I’d cut the fuckers who’d hurt her.

Tonight… Tonight someone would die.

“Is she dead?” Gregory poked a finger through the hole in my aching side and waited for a reaction.

A familiar, sticky substance coated my skin in grimy layers of dark red, the puddles of blood on the floor barely distinguishable against the muted black.

I was weak. So very weak.

Blood loss and pain threatened to send me slinking into sweet oblivion, but if I wanted to escape this hellhole, I needed to stay awake.

Two fingers touched the base of my throat. Rather than flinch away in disgust, I remained still and hid behind the deep shadows in my mind.

“No pulse. She isn’t breathing,” Silva said. “Guess we finally did her in.”

A beat of silence, then, “Let’s just make sure, shall we?”

Something sharp and cold parted my skin and buried deep. If the monster sharing my body had not been shielding me, I would have screamed from the agony piercing my belly.

“Dead,” Gregory pronounced. “You’re lucky this didn’t happen sooner or the boss would’ve had your hide.”

Silva snorted. “Luck had nothing to do with it. I’ve wanted to get rid of this one for years.”

My lungs burned with the scream I refused to let loose, and my mind began to fracture with the agony I was forced to suppress.

They had to think I was dead. They had to. If Matthew had taught me anything, it was that only the dead left the Hunters’ compound.

“When did you get permission to kill her?”

The burn in my stomach intensified. A thousand teeth were surely ripping me apart from the inside out.

“I didn’t,” Silva admitted. “Not exactly. Though they said to do whatever it took to—“

Just as I was about to lose my grip on the scream building in my throat, shadows danced across my mind and the monster that had once ruined my life came to my rescue.

I kissed my way down her neck. Long and elegant; the skin there tasted like sunshine. Like Hope. Like the best damned thing I’d ever tasted. Except maybe her lips.

Fuck, if I ever got my mouth between her legs…

Another groan tore from my throat and I stepped back to look at her. Swollen lips, eyes closed, breathing ragged.

Her eyes flew open. “W-what? Was it… Did I do something wrong?”

I dragged the back of my hand over my mouth and shook my head. “Nothing wrong, love. Too right. Can’t get enough of you.”

Soft pink spread up her neck and pooled in her cheeks.

I wanted to lick them.

What the fuck, Jason? You can’t lick her face.

My dick pulsed and I squashed the urge to slap it. Hope would think I’d gone insane. Not to mention, it would hurt. Though it deserved some pain, the fucker, for not letting me enjoy a peaceful midnight stroll with my girl without pushing so hard against my jeans I’d be left with a permanent imprint of my zipper.

Entwining our hands and pretending I wasn’t chafing in places a male should never chafe, I dragged her forward. “Never mind me, love. Tonight is about having fun. Not that kind of fun,” I hurried to add. Last thing I wanted was for her to feel pressured. Smiles were what I was after. Maybe a giggle or two. Or three. Some carefree laughter and shining eyes free of nightmares.

And no more kisses.

Her scent, warm and sweet and utterly indescribable, lingered in my nose.

I was so screwed…

“Take off your pants for me, my sweet.”

I stared at Lucien, at those glittering, sensual eyes and that indulgent half smile that promised both pain and pleasure.

My mouth went dry, but this time it was from anticipation.

Trapped in a sensual haze, I fumbled with my pants and pushed them down to my feet. Then I looked back at Lucien.

My feet moved before my brain had a say. I was spellbound, enchanted by the passion flaming in his eyes.

Had I ever thought them cold?

“So trusting. So innocent.” His hands closed around my wrist, pulling them behind me until they were manacled by his long, slender fingers. His free hand moved up to my neck, gripping with a restrained strength that both intimidated and built a fire deep in my belly.

“Lucien,” I gasped as he leaned forward and closed his lips around the flesh at the base of my neck.

“Mmm, my name on your lips is the sweetest music,” he murmured. Then his mouth firmed, teeth nipping at the sensitive flesh. Not too hard, just hard enough to send shivers of mixed sensations down my nerve-endings.

Pleasure with a hint of pain.

His grip moved to my hair, fist wrapping up the whole length as he gave a yank that made me raise up on my toes and arch my back so my breasts were pressed up against his hard torso. “You belong to me.”